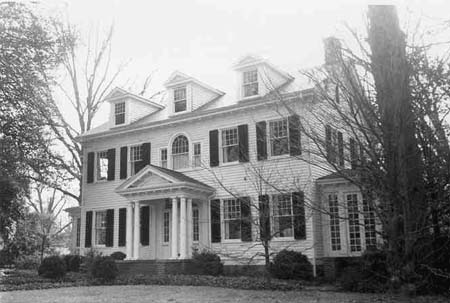 The early decades of the twentieth century were prosperous times in the Queen City. Cotton was king, and Charlotte was a hub for the trading, processing, and transporting of this valuable commodity. The geographic and economic climate undoubtedly lured businessmen from throughout the country into the area. One such person was Jeremiah Goff.

Jeremiah Goff (1858-1931) came to Charlotte from his native Rhode Island in 1900 at age 42. He was born in Warren, Rhode Island in 1858, the son Of Gesemiah (?) and Sarah Ingraham Goff (both native to Rhode Island). 1 During the first decade of the century, Goff, then a bachelor, lived in various uptown hotels, including the Buford Hotel, Central Hotel and the Hotel Selwyn. During this time, he functioned as Vice-President of the Charlotte Supply Company, a company that sold general mill supplies. In 1909, Goff went off on his own and established the Piedmont Sundries Company, of which he was President for the remainder of his life. 2

Goff appeared to be an experienced and influential entrepreneur before he arrived in Charlotte. His obituary mentions that he had been the President of the New Bedford Shuttle Company (New Bedford, Massachusetts), the President of the Standard Ring Traveler Company (New Bedford, Massachusetts) and the Director of the Industrial Trust Company (Providence, Rhode Island). In addition, Goff owned stock in Charlotte’s Chadwick-Hoskins Company. 3 Goff Street, near the Chadwick-Hoskins Mill, is probably named after him.

Miss Johnsie Dickson (1885-1979) became Jeremiah Goff’s wife in 1908 at age 23. She was born in Georgia, but apparently was living in Charlotte when they married. She lived to age 93 and was active in many organizations during her life. Her obituary lists memberships in the Colonial Dames, Daughters of the American Revolution, Charlotte Debutante Club, Charlotte Country Club, Athena Book Club, Charlotte Music Club, St. Peter’s Episcopal Church and the Daughters of the King. In addition, she served in the Motor Corps during World War I. 4

Jeremiah and Johnsie Goff resided in various places during the early years of their marriage. The City Directories show them residing at the Selwyn Hotel, the Blandwood Apartments, and 15 N. Poplar Street between 1908 and 1915. After 1915, they moved permanently to this house on Queens Road. 5 Interestingly, 1915 is the year that Queens Road was first paved. 6

The Goffs were 27 years apart in age and had no children. As far as can be discerned, they resided in this house alone until Jeremiah ‘s death in 1931. Mrs. Goff remained in the house until she was in her 90s. She moved to the Wesley Nursing home in 1978, at which time the house was sold. 7

North Carolina National Bank (now NationsBank) handled the transaction of the property in February of 1978, in their capacity as executor for the estate of Jeremiah Goff. The property was transferred to Francis Joseph Beatty, Jr, who sold it two months later to C. Jennings and Linda Snider. The Sniders conveyed the property the next day to Edward Donald and Elizabeth Laney Smith (as Laney-Smith, Inc.). 8

It is doubtful that Beatty or the Sniders ever resided in the house, but the Smiths lived there for five years. During their tenure, the Smiths undertook some alterations. They repainted the exterior, added showers into the bathrooms, and turned the sewing room into a bathroom. Mr. Smith died in May of 1983, and Miss Smith sold the house to the current owners in November of that year. 9

In 1915, the Colonial Revival style was the height of fashion in Charlotte and throughout much of the country. That Jeremiah Goff built his house in desirable Myers Park and chose this sophisticated style makes a statement about his standing in the community. The image portrayed by this fine home reflects tradition, fidelity, solidity, and prosperity–all attractive qualities in a successful businessman.

Surrounded by deciduous trees, the Goff House stands 2-1/2 stories tall and is of frame construction with weatherboard siding. The facade is symmetrical, five bays wide with a center entry and gabled portico. The pediment is supported by grouped Tuscan columns and features a modillioned cornice. The entry consists of a six-panel door surrounded by partial sidelights and a curved fanlight. Above the portico, a Palladian window lights the center bay of the second floor.

The house has a side-gabled asphalt-shingled roof which is pierced by three gabled dormers in the front. On the rear elevation, there is a single oversized dormer which holds a pair of small, fixed-sash windows. In addition, a tripped roof extends out from the main roof, shielding a rear sleeping porch.

The second floor sleeping porch is cantilevered (having no visible means of support) out from the rear elevation on the south side. It is ventilated on three sides by 10 twelve-over-one sliding sash windows. The south two bays in the rear (which contain the kitchen) extend out beyond the plane of the elevation, forming an ell which supports only a portion of the sleeping porch above. A small screened porch shields the center entry on the first story, and a tripartite window with a curved fanlight is found on the second story. Multi-paned sash windows complete the other bays of the rear elevation.

Two enclosed sun porches extend out from either side elevation. Both are completely enclosed on three sides by multi-paned fixed-sash windows. The raking cornices of the side elevations are punctuated by simple curved modillions, and the gable ends are pierced by quarter-round windows.

The center hallway is dominated by a dog-legged staircase with open stringers, a shaped handrail and square-section balusters. The starting step has a circle end–that is, it is rounded on the outer edge and projects out further than the other steps. The balusters continue down the stairs and around the edge of the circle step, supporting the handrail, which ends in a volute (spiral) pattern at the newel post. Upstairs, the landing newels are square with shaped caps. The landing is illuminated by a tripartite, multi-paned window topped by a fanlight.

Wide framed doorways separate the hall on the first floor from both the living and dining rooms. Fluted columns have been added (not original to the house) within the openings to create colonnades, a feature not unusual in houses built in the early twentieth century. A small bathroom opens up off the rear of the hallway.

Original woodwork remains throughout the house. The hall and both the living and dining rooms are encircled by a dentilled cornice. The living room mantelpiece is original and features a row of dentils just beneath the shelf, which is supported by fluted pilasters. Cabinetry in the pantry remains that features sliding doors–solid single-panel doors on the bottom and glazed doors on top of the unit. Another set of cabinets in the pantry appears to be a later addition.

On the second floor, there is a center hall, three bedrooms, three bathrooms, and a sleeping porch. A small room at the top of the stairs is said to have originally been a sewing room, but was converted into a bathroom by previous owners. This room features a Palladian window that overlooks Queens Road. The master bedroom is the largest and has a fireplace, two closets and a bathroom with original fixtures. On the other side of the hallway, there is a smaller bedroom (in the front) and a den (in the rear). There is a bathroom off the den, which also retains original fixtures–only the stall shower was added. Off of the den, the sleeping porch overlooks the back yard, and has multi-paned sash windows on three sides.

An original hipped-roof frame garage stands at the rear corner of the lot. It was built for two cars and features fanlight-type windows in each half of the double garage door. The building itself includes a room at the back, with a separate, recessed entry and a small chimney flue.

Deciduous trees and shrubs ring the property, leaving the front lawn open to Queens Road. A paved driveway runs along the south side of the lot, leading back to the garage and a gravel parking area. Herringbone brick paths lead from the front door through the yard to Queen’s Road and also along the side of the house to the driveway. A similar path circles the back yard, delineating the gardens.

Cultivated gardens circle the back yard and feature various flowering plants, including spring bulbs, Wisteria, and Azalea. A natural wood pergola marks the entrance to the garden. The predominant structure, however, is a latticework shelter with a shingled hip roof. A stone and concrete birdbath stands in the shade at the north side of the house, and is said to be original.

As far as can be discerned, little or no original material has been removed from the Goff House since the date of construction. Items added by current or previous owners include the columns in the first floor doorways, cabinetry in the pantry, cornerbeads above the living room fireplace, and the shower in the second floor bathroom. The second floor guest bathroom has been added the kitchen has been modernized. The house, grounds and outbuilding are in excellent condition.

In close-to-original condition, the Goff House represents a fine example of early-twentieth century Colonial Revival architecture in one of Charlotte’s earliest and most-desirable suburbs. It reveals a style and standard of living available to a well-to-do businessman during the 1910s.

Jeremiah Goff could afford to build his house in a manner not always available to the average middle class American. Some finer details in the house include the beveled glass, Palladian window, and interior woodwork. That quality materials and workmanship were used remains evident today, and bears testament to the high caliber of this building.

1. Name and location of the property: The property known as the Goff House is located at 1116 Queens Road in Charlotte, North Carolina.