Mary Norton Kratt tells the story of Elizabeth and Edwin O. Clarkson and their garden in her book, A Bird in the House:  The Story of Wing Haven Gardens.  The Wing Haven story begins as follows:

Elizabeth Barnhill told Eddie Clarkson on their first date in Boston, where he was working and where she was attending the New England Conservatory of Music, how she and her mother had raised white-winged doves.  After five years of courtship in seven states and one foreign country, Eddie and Elizabeth became engaged. Eddie’s father urged, “Don’t let that pretty, little auburn-haired girl get away.” Eddie proposed and drove his Essex auto to Uvalde, Texas in 1925 to give her an engagement ring.

The Clarksons, even before they married, decided to move to Charlotte and build a home.  “She said she needed two weeks to draw up the plans.”  Eddie Clarkson was a salesman in Charlotte, North Carolina, working for the Wesley T. Heath Corporation, which sold land and built homes.  In the fall of 1926 Eddie bought a 75’ by 225’ deep lot from Wesley Heath in the Poplar Gables neighborhood, with the idea that he would pay for the house over 10 years.

Elizabeth mailed Eddie her own design for the home she envisioned.  During the fall before their marriage, Eddie received many letters from Elizabeth which contained sketches and building instructions.   It would be a simple two-story frame house with large windowed rooms which drew the outdoors in. It would have a linear, wide-windowed kitchen where a servant could efficiently prepare meals and carry them to serve in the garden. Elizabeth planned a raised brick terrace off the double glass-doored living room to which her piano could be moved  for entertaining at candlelit garden parties. And when they had children, they would add rooms in flanking wings which would balance the vertical house.

The house has many features specified by Elizabeth. These include the picture windows, the terrace fountain, the sewing room, the numerous built-ins for storage, the use of wall mirrors in every room but the kitchen and the bird feeders attached to the second floor windows and the dining room windows. She also envisioned formal gardens surrounding the house.  Her designs brought the outside in, even including some of her pet birds, like Tommy the Bluebird who lived completely inside the house for about one year.[4] 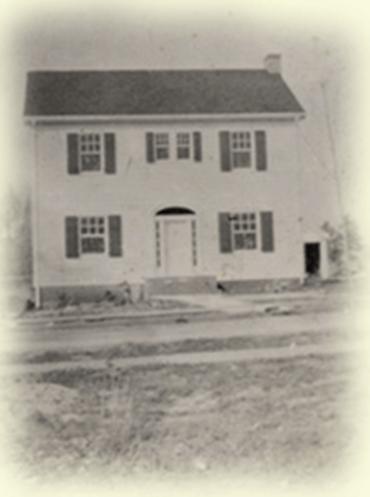 In terms of design, the most striking thing about the North East side of the house is the built-in bird feeder on the second floor just outside of Elizabeth’s bedroom window.  (Elizabeth was often ill in the early years of her marriage due to contracting undulant fever from unpasturized milk.  She would spend days in bed, but because of her custom configuration of the windows she was able to see her garden and interact with the birds.) As previously mentioned, Elizabeth sent plans to Eddie prior to the construction of the house.  Her goal was to bring as much light into the house as possible.  She was also focused on having an almost 360 degree view of the garden from within the house.

The west elevation shows even more of Elizabeth’s design ideas.  There are three large picture windows on the first and second floors of the West (back) of the house.  These were not original to the house, but added at a later date.  The Picture windows replaced the original double six over one window on the second floor looking out of Elizabeth bedroom, and out of the Guest Bedroom on the right side of the second floor.  The original double French doors off the living room were replaced with one large door with a single pane of glass.  On the first floor, just off the living room, a small patio is accessed through a large glass (picture window like) door.  This door was designed so that the Clarksons could roll the grand piano onto the terrace for outdoor concerts.  On the second floor, there is a bird feeder attached to the center hall window that allows for the birds to enter and exit the house via a small opening built into the window frame.

By April 1927 the house was finished.  It was located in Poplar Gables, a new neighborhood adjoining the well established Myers Park neighborhood.  In contrast to Myers Park’s curvilinear roads, Poplar Gables featured a standard grid pattern of streets.  The Clarksons’ lot in Poplar Gables at 218 Ridgewood Avenue was a flat rectangle featuring a simple box-like house set close to the street. There was hardly another house in sight when Elizabeth and Eddie arrived at the Charlotte train depot after their honeymoon in the spring of 1927.   Elizabeth insisted on going immediately to the house and lot she had seen only in her imagination.  Eddie slowed the car and stopped in front. Elizabeth gasped.   The house stood stark and solitary in a field of hard, red mud with nothing green except a few waist-high pine seedlings.   Eddie led her around back to the single tree, a spindly willow oak.  Since Eddie did not have the door key to the house, they climbed in a window. He led her into the living room where his wedding present waited, a mahogany Steinway baby grand piano.   The next day Elizabeth started her garden.”[5″

or the Wing Haven web site at:  https://www.winghavengardens.com/